My dear husband just got back from his trip to the jungles of Africa and he has agreed to do a guest post for my blog. Here is his travelogue in three parts – this is Part 3 of 3 which covers Golden Monkey trek and my husbands notes on Rwanda. Read Part 1 (which covers how the group of three “in-laws” was formed and their trip to Akagera National Park) and Part 2 (which covers their Mountain Gorilla Trek).

I met my father-in-law (AM) and his brother-in-law (RNS) for an early breakfast at Le Bambou Gorilla Lodge’s dining room. They complained of varying degrees of pain in the legs and feet from the hiking yesterday to see mountain gorillas. I had some aches too but all of us were eager for the day’s trek.

AM and I were going to do the Golden Monkey trek while RNS was going for another gorilla trek. The initial procedure for AM and I was same as for gorilla trek – the permit is cheaper at USD 100/person and doesn’t need to be reserved in advance. There were 15 individuals for the trek and the trek itself was a walk in the park – more exactly, a walk through a bamboo grove.

On through the jungle… 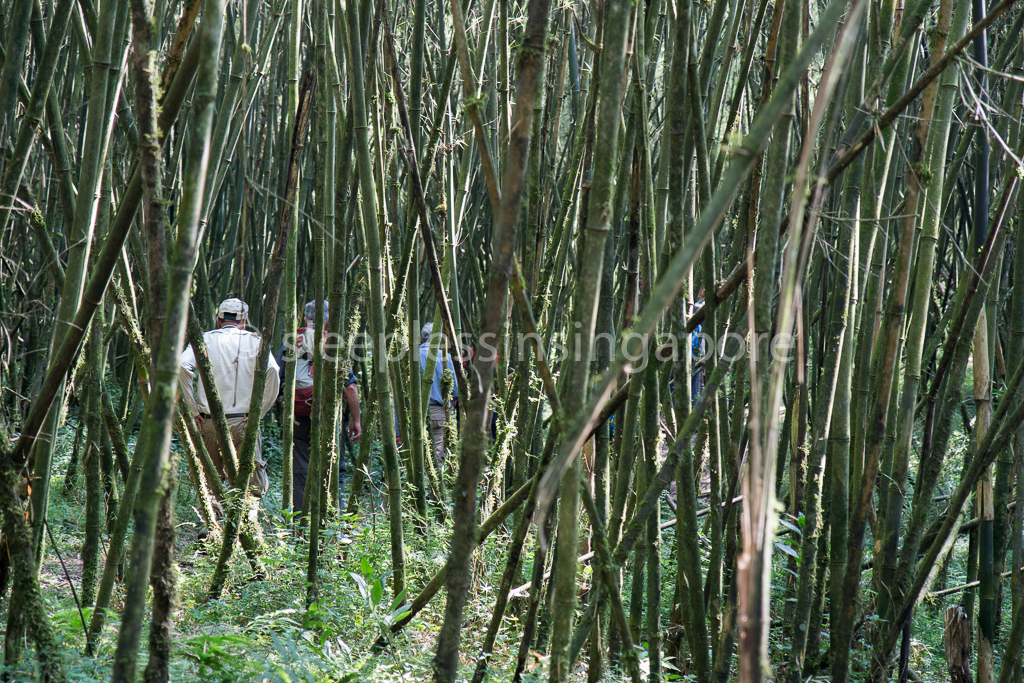 …and through a cool shaded bamboo grove…

Apart from swiftly crossing a clearing that was infested with red ants of all sizes, there was nothing by way of difficulty. A random nettle sting here and there was also par for the course but I didn’t really stop to caress any of these beastly leaves so the sting was mild and the itchiness would go away within minutes. 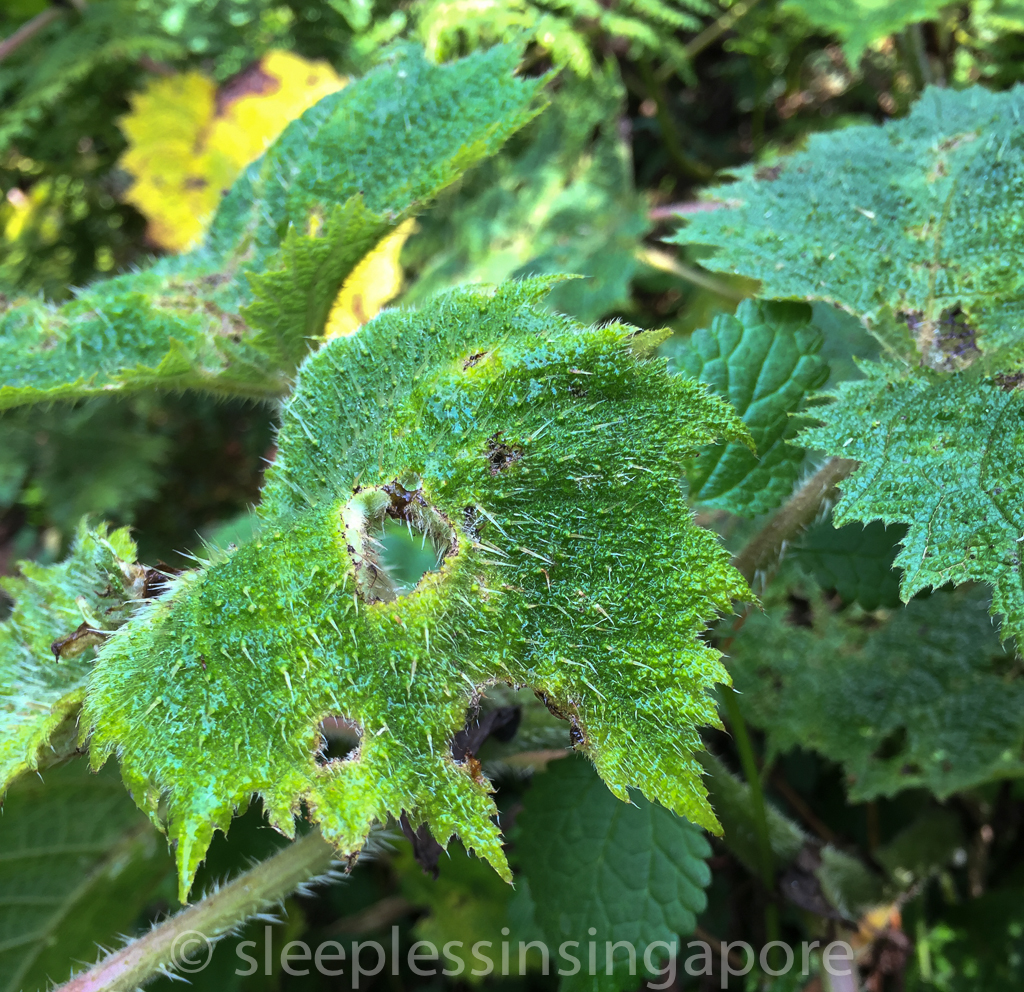 A leaf straight out of “The Monster Book of Monsters” in Harry Potter!

The golden monkeys were found after a 45 minute walk and they were jumping out and about as monkeys are wont to do. Everyone in the group of 15 people got good photo opportunities but I did get the feeling that after the gorillas, these were seen to be the poor cousins. 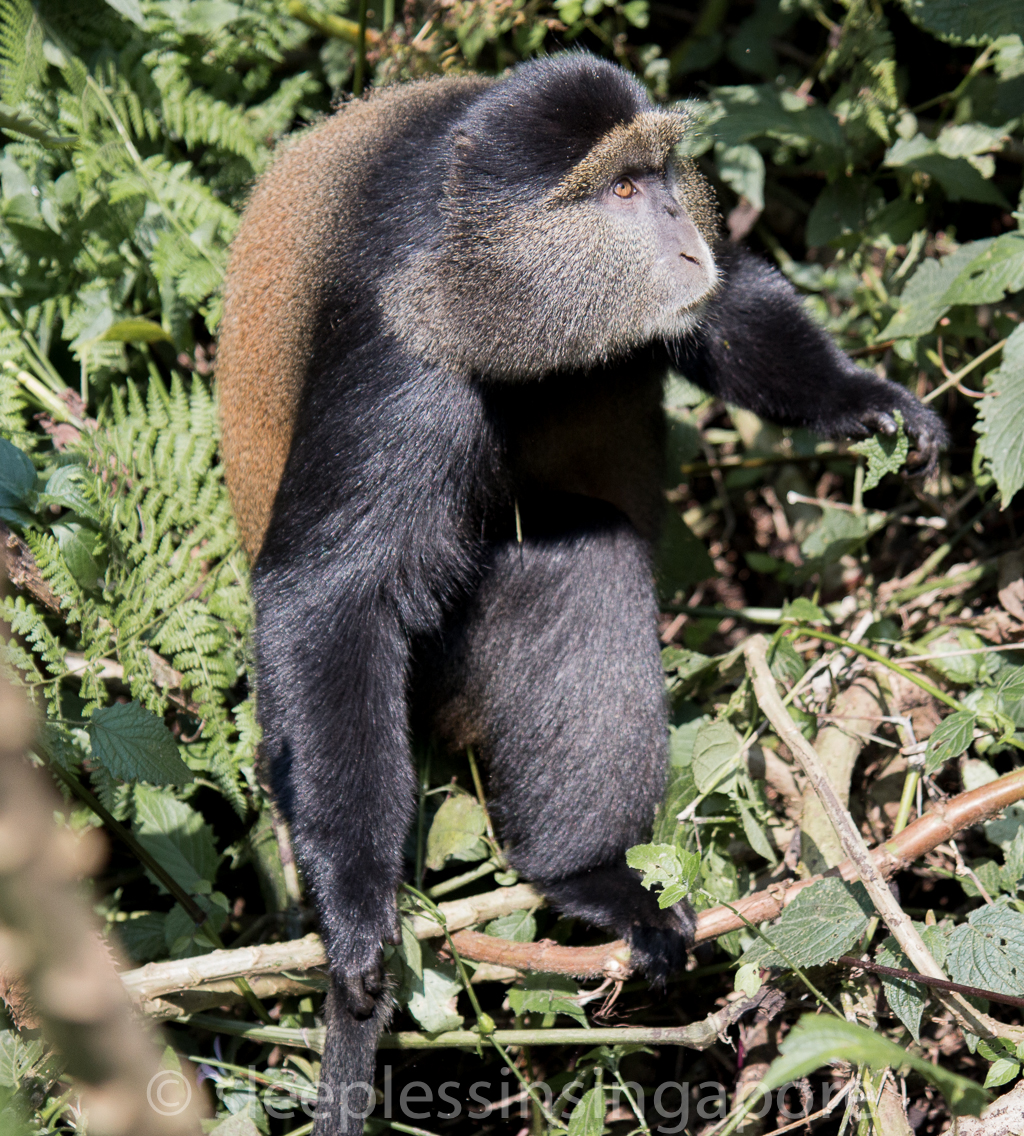 On the way back, there was a porter who fainted – possibly from not having enough water and/or food since the morning. I lent him my water bottle and another person who had some energy bars gave him a few. He was so grateful that it showed in his face although he couldn’t say it as he didn’t speak English.

And that brings me to the next point in this post.

The permit for the gorilla trek was quite expensive but I see this as a form of eco-tourism or assistance with the conservation efforts, without which not only will the mountain gorillas get wiped out, but even Rwanda will face a lot more economic issues than it faces today. Tourism is the main source of revenue for the country.

Mountain gorillas and golden monkeys are both critically endangered species. As per last census in Q4 2015, there were 880 mountain gorillas in the world. Our guide told us that the number is expected to be 1,000 in 2016 census. The conservation effort has been a great success story in Uganda and Rwanda which is widely hailed.

However I saw this article in the BBC which highlights that Uganda may be conserving the gorillas well but at the expense of the Batwas (indigenous people who shared habitat with the gorillas and have been displaced). In Uganda the permit costs USD 600/person and only USD 8 of that goes to local communities. In Rwanda 10% of the permit price of USD 750/person is channeled to local communities although I don’t know if that is enough. 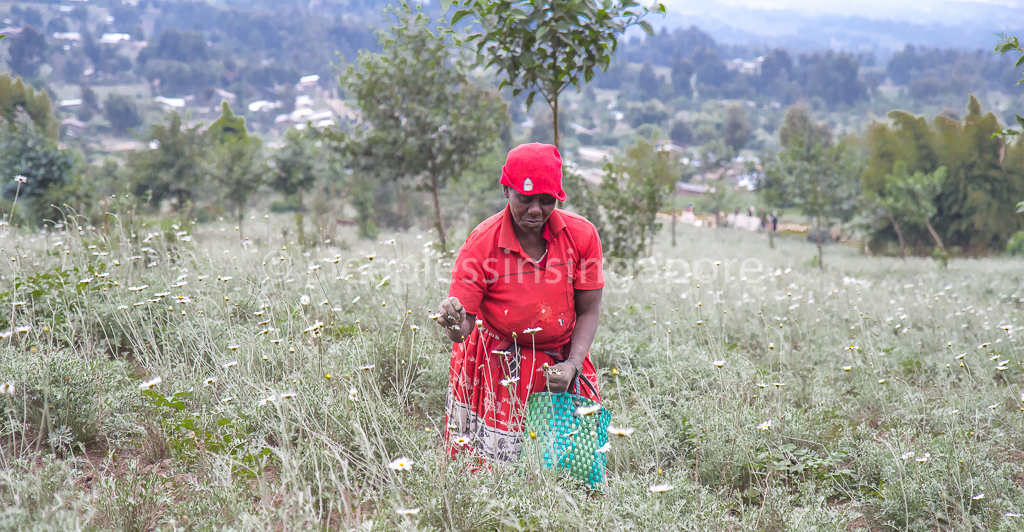 Poverty in Rwanda is high – most of the population lives on subsistence farming. So hiring porters is definitely recommended at the minimum rate of USD 10/porter. Each individual porter can only get work once a week and possibly less so this is quite low an amount for them. Similarly tips given to rangers, trackers, etc helps to boost their regular salary from the Volcanoes National Parks and help to keep them away from poaching, hunting wild animals for food, etc.

Not only are porters very helpful, they also need the job

In spite of the poverty, Rwanda is a country that is trying hard to improve her condition through good government and a culture of discipline. I read somewhere that President Kagame has ambitions to follow the Lee Kwan Yew and make Rwanda the Singapore of Africa. People follow the rule of the law even if there is no policeman around. I saw people queuing up for buses at a large bus terminus. I am told that crime rates are quite low and Kigali is generally safe for women – we saw women walking alone at 10pm. Apart from this, I noted:

Beautiful flowers in a farm

I would like to thank you for your kindness if you read this far into the post.

There are lots of places in the world where efforts are being made for sustainable conservation of critically endangered species. Rwanda is but one of the places and the Mountain Gorilla and the Golden Monkey are but two of such specie. Even though sometimes the permits can be expensive, it is worth visiting – for me, it was my first such trip and it gave me a new experience which I will treasure, apart from the appreciation of our world and fellow inhabitants.

Rwanda or East Central Africa may sound forbidding to some as it did to us – visions associated with 3rd world countries like rampant petty crime, cheating tax drivers, cheating tour operators, badly serviced hotels etc may come up. But Rwanda dispelled all of these visions from the moment we set foot into Kigali airport – it is a beautiful country with very friendly and honest people who need your help. Please visit and help the mountain gorillas and help the country.

Our porter for the gorilla trek

Bernard – he kindly taught me a smattering of Rwandan. 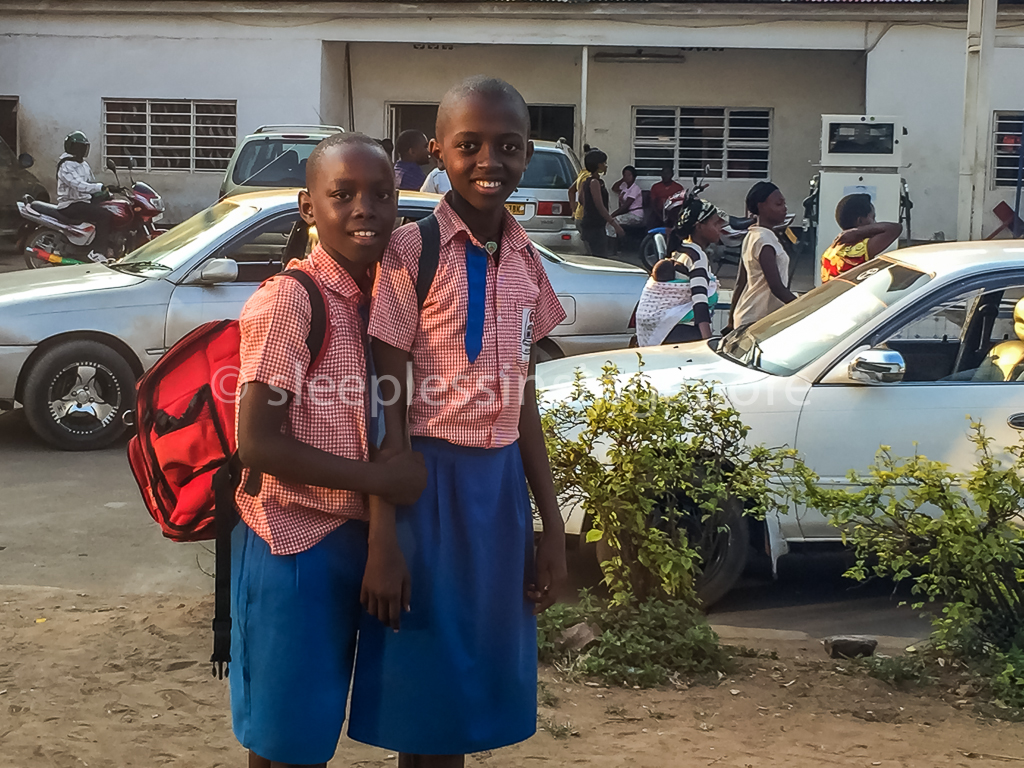 I was clicking aimless from the car while crossing Kigali, when I noticed these two happy kids trying to move into my frame – keen to be photographed! Such lovely bright smiles.

I was clicking aimlessly from the car while crossing Kigali, when I noticed these two happy kids trying to move into my frame – keen to be photographed! Such lovely bright smiles. 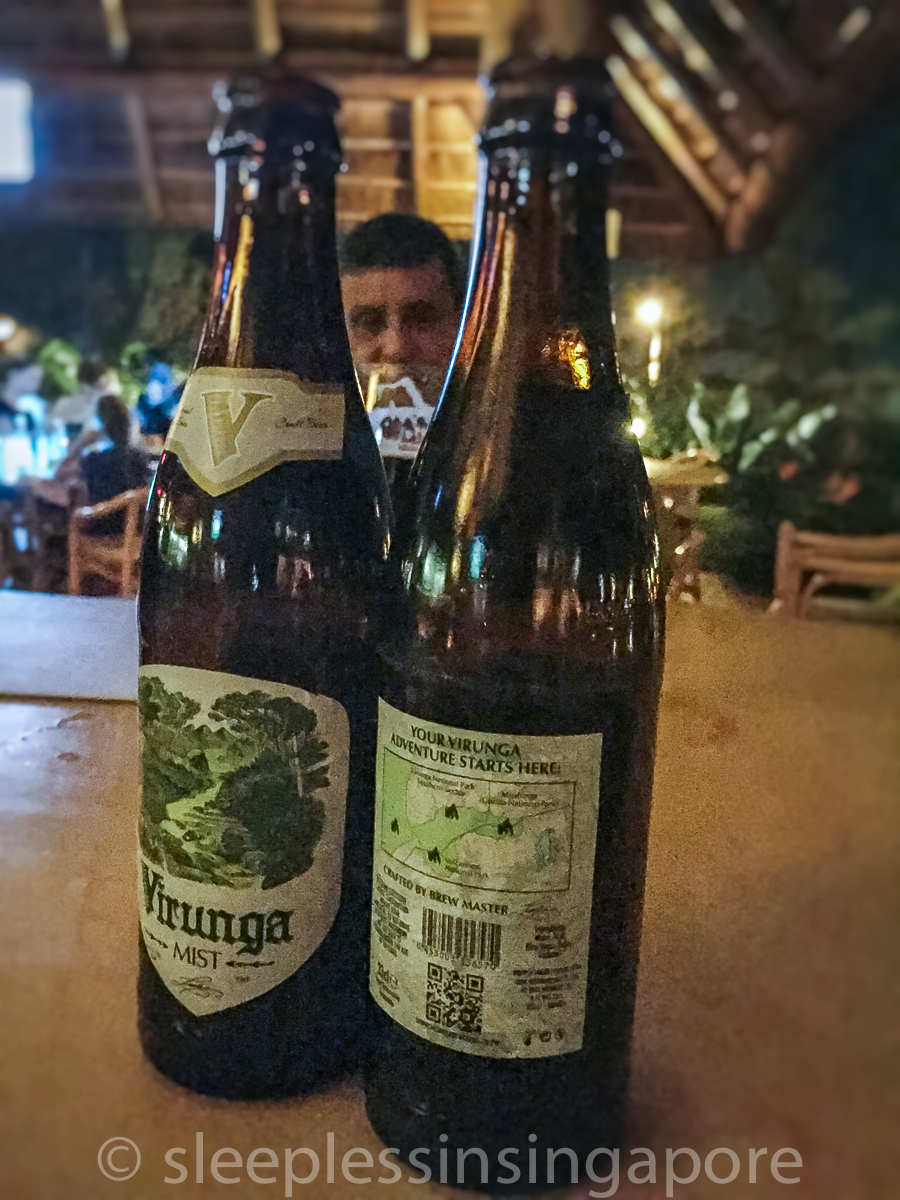